Reading week is a big deal when you’re in university, and for the past two years we’ve been honoured to have members of the University of Alberta Scuba Appreciation Club spend their break with us. What a fantastic group we had this year; 16 shining happy faces! We visited several of my favourite sites on the island (of course, I’ve been accused of having them ALL be my favourite): Cedral Shallows and Paso del Cedral, Chankanaab Shallows, Palancar Gardens and Palancar Caves, La Francesa (where some of us did a beautiful dive on the wall there), San Clemente, Paradise (we saw SIX seahorses there), and on our final day, Santa Rosa Wall, which is one of my favourite spots on the planet, and then finished up with a ripping drift dive at Punta Tunich. In between, there were lots (and lots) of shore dives as well as four night dives.

We once again had a wonderful Friday night barbeque next to the pool at Blue Angel and it’s safe to say a great time was had by all! By all reports, next year’s Reading Week trip will be at least half-filled with people who attended this year, and may also include a couple of young Texans who were befriended by the Club! 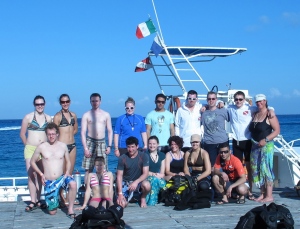 We posted a few more photos at AtkinsScuba.com’s facebook page.

Next up: Ocean Sports visits Cozumel one more time, in March!